A downloadable game for Windows, macOS, and Linux

Story:
Peace is scarce in the country of Aslande, and it has been at war with the neighbouring country of Eressia for centuries. When one battle ends, another inevitably begins, either months or years later. To Rhea, however, war is a distant concept; something she has heard about, but never witnessed. Born in a small, secluded village, Rhea occupies her life with more mundane concerns: her job at the local hospital, her playful bickering with her friend Asa, and her prayers for a successful harvest come autumn.

However, when Rhea's childhood friend, Luca, returns home to the village after fighting in one of Aslande's many wars, Rhea is suddenly faced with a problem. Why is Luca suddenly so cold, so distant? What did he see out on the battlefield, and how did it change him?

At the same time, new worries plague Rhea, as one of the patients at the hospital is suffering from a rather perplexing illness - and a failure to cure him could have some unpleasant outcomes...

About:
This World Unknown is a fantasy-themed otome game where the player assumes the role of the first person narrator, Rhea, and can romance four available guys. Which route you end up on depends on the choices made during the common route.
The character routes themselves are rather long, and have a lot of plot twists and world building (and lots and lots of characters).
The screen resolution is 1280x720.

Credits:
Writing, programming: Ebi-hime
Sprites/CGs: Adyrn
Music: Amachamusic & DLsite
Backgrounds: Various. There is a full list of every single BG used, and credited, in a .txt file with the game.

In order to download this game you must purchase it at or above the minimum price of $7.99 USD. You will get access to the following files:

Heyo!!
Basically I wanted to play this game for a lot of time, but I got it only last year on steam.. I think? And I was too shy to comment that time... I loved it a lot, when I saw the art style I was really curious bc I've played a lot of VN but none was like this. There are a lot of routes and endings and I literally cried. I spendend like 2-3 days playing this. I
loved almost all characters (especially Asa and Garret, but I liked a lot Valerian and Nen as well ((Nen best slime *coff coff*)) ). I saw a lot of characterization in this game, also the plot, the soundtracks, the MC... (Oh god, I loved Rhea a lot, and I'm used to dislike the female protag 70% of the times) It's a great game, I always say to my friends to play it, I'm sad no one checks this out.. its totally worth it imo ;;

Hello there! I have a lot to say so I'm sorry in advance for the length! I bought/played the game on Steam but came here to rate and comment ^^

I know TWU came out over two years ago, so I'm a bit late. But I just finished it, and it was an absolutley wonderful 41 hours! Since I downloaded it, for this past week or so, I've pretty much had it on my mind constantly. I would spend all day being excited to get home and play some more! Now I'm sad that it's over and I even feel a bit empty, haha.

I'm a 17 year old girl, the same as Rhea. Even though we obviously have a lot of differences, I enjoyed being able to relate to her in some ways. I think her personality is a bit similar to mine. That was actually one of the factors that originally drew me to TWU. I didn't think she was bland- in fact, quite the opposite. Few VNs would have an illiterate, intensely religious girl as the protagonist, and that's why I think she's actually very special. After playing through all the routes, you kinda grow a sort of attatchment to her and you just want her to be happy. That's why the route endings were all so satisfying to me, regardless of who my favorite LIs were.

Val & Luca are tied for my favorite LIs and then Asa > Garrett. I appreciate how the side characters were actually important to the story as well (Meirin, Clair, Selene, Nen, Meeko...) and I love how they were all fleshed out and likeable in their own ways.

The different routes were crafted so well, and it was clear that they had each other in mind. I jumped around the routes quite a bit...I got halfway through Garrett's route before I paused and did Valerian's. I did the same thing with Asa and Luca's routes. I was so excited to do Val and Luca's routes that I just couldn't wait! But, enough about my strange method of gameplay. I liked seeing how the different characters fit into different routes and how things connected. It made TWU a really great experience.

The soundtrack was lovely. After a while, it even started to sound nostalgic, in a way. Even when I wasn't playing the game, I found the music was still going on repeat in my head. Oh, and the art was absolutley amazing! I don't think there could have been a better artist for TWU. I was also pleasantly surprised at how many character sprites there were, even for characters who didn't appear as often.

I'm pretty bummed out that this VN isn't more popular. It's clear how much work went into it and it really shows. The worldbuilding in TWU was strong enough that I feel like it should have its own fandom of some sort. Or...at least, more people talking about it. Anyways, sorry for the long comment! But, as a new fan of yours, I just really wanted to let you know how much I enjoyed your story! I honestly think you are a fantastic writer, so please keep it up~ and I'll definitley be checking out your other VNs! ≧◡≦

Aaah this is so sweet of you! Thank you so much!! >_<
I'm sorry for taking a few days to reply - this was such a long and kind message that I wasn't really sure what to say, haha n_n;;

I'm glad you enjoyed the story so much! Writing and coding something this huge was quite a challenge, so I'm glad it paid off in some small way, and a few people liked it!

I'm also really glad you liked Rhea! I was worried people would find her boring, since maybe she's a bit passive at times (though I tried to make her stand up for herself when the story called for it too haha). I like her a lot too, and I think she's a sweetheart u///u

Val & Luca are also very easily my favourite LIs, too. I think they are probably most people's favourites, haha. I wonder if my bias for these two characters was too evident when I wrote the story...

I played this game on steam ^q^ I am a big fan of the art and I've grown attached to the characters. I'd hate to ask you, despite you having already addressed the credits of the music you've used but do you know what the songs are called? I can't get the orchestra-esque song out of my head. It's probably the most heartwarming song I've ever heard. You have great taste in music and in setting the mood of the VN.

Thank you for the comment u///u
The songs were all obtained from Japanese websites, so they all have Japanese names, and I renamed all of them so I could organise them better. Do you know where this orchestra song plays? Maybe I can find it for you if I know which song you mean specifically.

Ah I see, thanks for the help! It can be first heard on May 18th of the game--the scene with Selene and her father. ^^

im super in love with this game!! ive only played the demo so far but im really impressed with how it feels like a very well crafted experience. the straight forward writing works with the simple, clean style of the cgs/sprites and ive always been really impressed with polished games like this. ill definitely be buying a version of it asap!

Thank you, that's very kind of you to say! >///<
I think the clean style of the sprites and CGs suits the writing as well, since the writing is pretty... simple, maybe? XD;;
If you buy the full version, I hope you enjoy it! <3 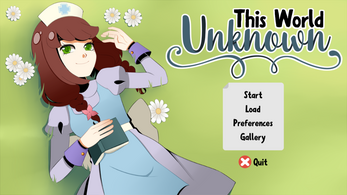 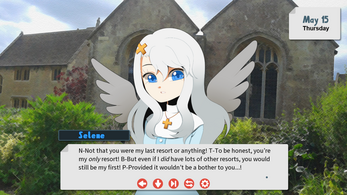 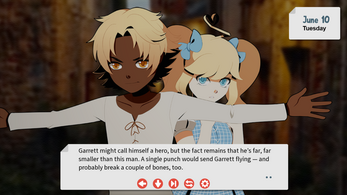 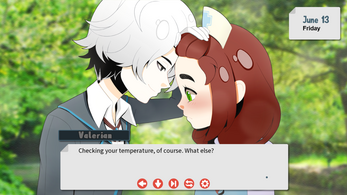 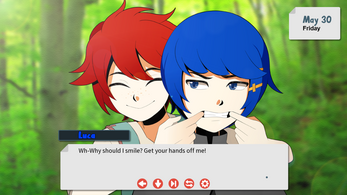